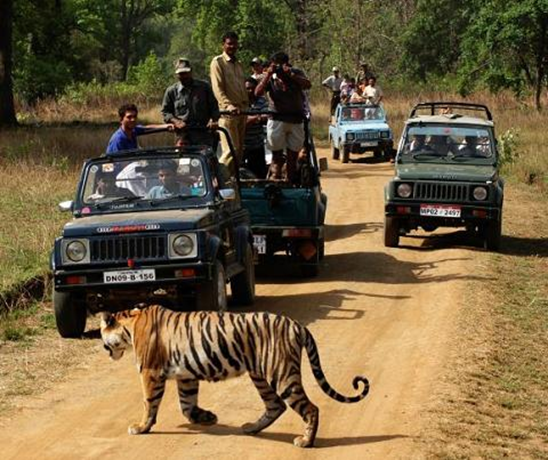 Spread across an approximate of 390 sq km, the Ranthambore National Park is located near Jaipur in Rajasthan. It is one of the most famous national parks of the country and also the largest one. It was once, for the kings of Jaipur, the main hunting base. And today it is a huge tourist place. The tiger population there is good. During the day, you can notice tigers doing their regular chores. The park is flanked by double sanctuaries named Mansigh Sanctuary and Kaila Devi Sanctuary. You can also find a few very large banyan trees there. Within its premises lie various lakes. Photographers and wildlife lovers come here from all over the world.

The Ranthambore National Park was initially founded as Sawai Madhopur Game Sanctuary by Government of India back in the year1955. In 1973, however, it was pronounced as one of the countries ‘Project Tiger’ reserves and, in 1980, the place was finally made a National Park. Then later in 1991, its adjoining Keladevi Sanctuary and the Sawai Man Singh Sanctuary too became a part of the Ranthambore National Park. It is one of the biggest national parks in India today. The park was named after the very old and ancient Ranthambhore fortress. Also, it is flanked by the River Banas in the north and River Chambal in the south.

The Highlights of the Park

The Park is basically very well known for its tigers. There are jeep safaris and Wildlife Safaris to tour the Park and see the wild animals in their very natural habitats, that too from a very close range. Jeep safaris take around three to four hours to tour the entire place. Other than the mighty tigers, the visitors also get to watch leopards, hyenas, deer, crocodiles, mongooses, boars, gazelles, jackals, etc.

By Air:  Nearest airport to get to the Ranthambore National Park is Jaipur. The Park is situated only 180 km away from the Jaipur city. You can hire a cab or avail the bus services to get there. Also, the staff of hotel or resort in Jaipur city where you will stay can guide you well on how to plan the Ranthambore trip.

Although the park remains open between the October and June, the fine time to visit Ranthambore Park is between December and March when the weather is pleasant. It remains opens from 6:00 AM till 6:00 PM.

If you are going for just a one day trip, then put up at a hotel in Jaipur city. Otherwise you can find accommodation in Ranthambore too.