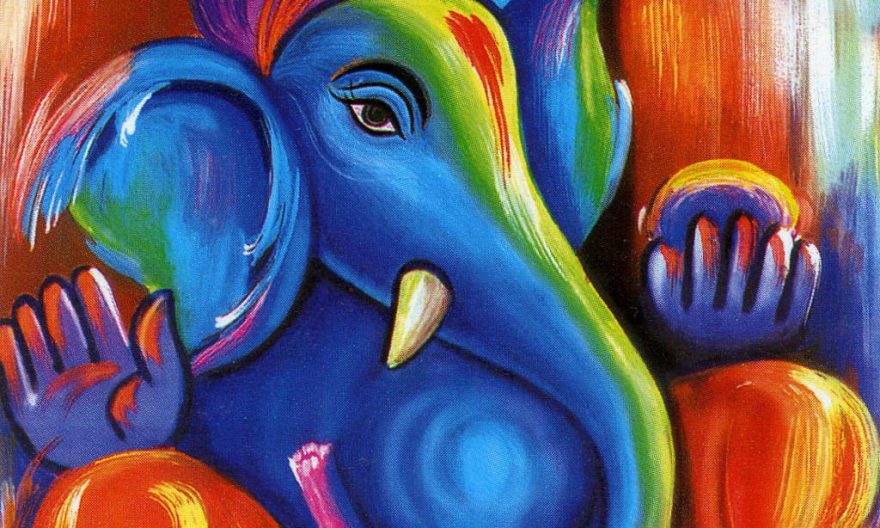 “If you hear a voice within you say you cannot paint, then by all means paint and that voice will be silenced.”

What our heart desires is most of the times remain unknown; not for the artists though. I am a writer and I love to express my thoughts through words. Similarly, an artist puts his voice on the canvas via colours, patterns, and strokes of the brush.

Since I am from India, I am blessed with so much diversity that breathes and lives around me. The rich heritage of Indian art history tells that this nation with numerous religions and beliefs has a lot to offer to the people who have an artistic mind.

Religion is a big thing in India. With more than 80% of the population belonging to Hindu religion, the depiction of Hindu Gods and Goddess becomes inevitable. Even the people are highly fond of religious paintings representing the physical manifestation of the Gods.

One such deity that is going to be the centre of our discussion today is Lord Ganesha. I have seen numerous Ganesha paintings around me on different occasions and several places. The beauty and innocence that are shown with the elephant-headed God are just incomparable.

If you are not from India and have never seen an exquisite artwork of Lord Ganesha, you are missing on something big. This article, will, however, offer you a glimpse of how and why paintings of Ganesha provide an ecstatic emotion to the art lovers. Let’s start:

Ganesha: The Son of Shiva and Parvati

The epic story of Ganesha’s birth is just out of this world. It is believed that Parvati made Ganesha from the sandalwood paste only to secure the door while she is bathing.

Ganesha, bounded by his mother’s order stood at the door. At the same time, Shiva came and seeing Ganesha standing there amused him. Both, Ganesha and Shiva were unaware about each other’s identity countered each other leading to a ferocious battle.

In the end, Shiva beheaded Ganesha. When Parvati came to know about this, she told Shiva to bring his son back or she would bring an end to the world. Understanding the entire scenario, Shiva told his disciples to go and bring the head of the first living being they can find.

The followers came back with the head of an elephant. Shiva brought Ganesha back to life by attaching the elephant head. Lord Shiva, Goddess Parvati, and all the supreme beings adored Ganesha with supreme power since then.

The story of Ganesha is so fascinating that the artists and the art lovers cannot hold themselves back from the artwork related to this supreme deity.

Ganesha is deemed as a good omen

For people in India, Ganesha is always meant as a good omen. Doesn’t matter if the person has bought a new car, a new home, a new laptop or a new anything, worshipping Ganesha on such occasion is believed to bring prosperity and luck.

In addition to this, people who buy a new house or office also tend to put up the Ganesha paintings so as to bring good fortune.

Perhaps, Ganesha’s artefacts and paintings are the most sold in India. Since a lot of festivals are celebrated here and each occasion has its distinctive meaning, Ganesha paintings fit a lot of them.

On Diwali hence, paintings of Ganesha are sold a lot.

Apart from this, Ganesha Chaturthi is another occasion when artworks of this deity become high in demand. People also gift the Ganesha paintings when visiting someone’s baby shower, housewarming party, and similar events.

Ganesha is an exemplary role model. People hope to put up the paintings of this deity in their house, office, and similar places just with a hope to infuse positivity in the entire environment.