There is no denying the fact that traditional paintings like the ones created during the pre-historic times i.e. the rock paintings. The carved pillars of Ellora in Maharashtra state is the fine example of Indian traditional artwork created dating back in 7th century.

The paintings of India immaculately represent the imaginative range that extends from the early civilization up until today. It goes without saying that paintings in India have evolved over the decades and it is a perfect blend of different types of ethnicities and philosophies. Besides, the artists have also tried to bring in the Iranian, Greco Roman, as well as Chinese influences in their work.

In this article, we shall discuss in detail about some of the Indian traditional paintings that were created during the Mughal era.

Mughal traditional paintings are predominantly limited to photographs showcased and published in book as well as exhibited through miniatures. Art paintings were encouraged by the rulers of the period of the Mughal Empire. Paintings at time of Mughals were an amalgam of Persian, Islamic, and Indian panaches.
Paintings during this era were principally created in two main categorizes that is the miniatures and murals.

Miniatures are the type of paintings created on smaller scale. The medium used to create them is perishable material, including cloth and paper. These types of paintings are mainly found at Palas of Bengal.

On the other hand, Murals are considered as form of artwork that is created on larger scale. It is mainly executed on the walls of the solid structures. Well, these types of traditional paintings can be found in Kailashnath temple and Ajanta Caves. During the Mughal reign, the miniature Indian traditional paintings reached the grandeur. Later on, this folklore was further taken to new heights by the painters of various Rajasthani schools of art paintings such as Kishangarh, Bundi, Jaipur, Mewar, and Marwar. 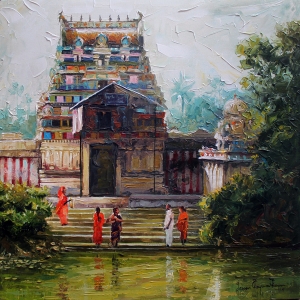 The modern Indian art witnessed the upsurge of the Bengal school of art in 1930’s. This was followed by various researches in Indian panaches and European. After independence, many distinguished and upcoming artists came forth with unique form ideas and imagination. Some of the traditional paintings created by distinguished artists are MF Hussain, Gaitonde, FN Souza, and Jamini Roy. The forms and panaches of the paintings gone through various transformations as the economy of the country evolved. The free stream of the traditional evidence had been witnessed in 1990s, when Indian economy was assimilated and freed up.

It’s not that today only the people feel more inclined towards different forms of Indian traditional paintings even in yesteryears it influenced the general populace in same manner. You can even decorate your personal spaces with beautiful paintings created by renowned artists by exploring work on online art galleries.