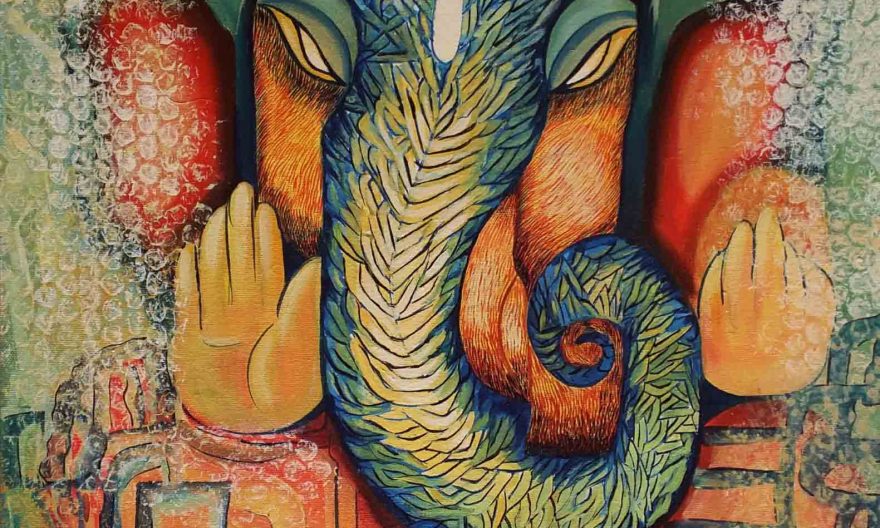 Art, in a subtle form, reflects the ecstasy of human emotions in a colourful and aesthetic expression. Artists in India are known to bring down the human’s sentiments very creatively using their skill and imagination. India, a land where curiosity and acceptance go hand-in-hand, comprehending a painting becomes a baffling task.

Out of the varied art styles, Indian art is exclusively known for its contribution to the depiction of the religious characters. People love to worship a myriad of Gods and Goddesses in India and artists, from the beginning of the civilisation, have been quite fascinated by this aspect. This is the reason that even today while exploring an online or offline art gallery you can witness mesmerising manifestation of deities on canvas.

One such representation is of Ganesha. Lord Ganesha is a well-known religious deity in India who is popular and is worshipped by billions of people. His birth anniversary, which is famed as ‘Ganesh Chaturthi’ is celebrated with extreme delight and energy in India. During the festival of lights, Diwali, Ganesha, and Lakshmi are worshipped together in every Indian home.

So, when I looked at the representation of Ganesha on the canvas, it captivated me instantly. People love to hang the Ganesha paintings in their homes and workplaces. Ganesha artworks are also considered an amazing alternative for gifting. People who love art also gets eluded by the impeccable embodiment of Lord Ganesha because of several reasons.

Reasons why Ganesha is popular?

Shiva, the supreme power, and Parvati, the Goddess Shakti are the parents of Lord Ganesha. Ganesha, obscurely, is shown with a head of an elephant and rest as the human body. As per Hindu scriptures, Ganesha is considered extremely lucky and pious for the new beginnings. Businessmen and working professionals also have a great inclination towards Ganesha and Lakshmi (his wife) as both are meant to bring prosperity and growth.

All these assumptions and beliefs are there because there are mystical and mysterious tales from Ganesha’s life. For example, his birth was not natural. It is said that Parvati made Ganesha, a boy, with her sandalwood paste and told him to guard her door while she was bathing. At the same time, Shiva came and saw a young boy at the entrance. So, Shiva told him to step aside. Neither Ganesha nor Shiva was aware of each other’s’ identity.

Ganesha ferociously told that he cannot let anyone enter as it was ordered by his mother Parvati. To this, Shiva got furious and attacked Ganesha. A fierce battle started that ended with Shiva beheading Ganesha. When Parvati came to know about it, she was devastated. She told Shiva that if he cannot bring Ganesha back to the life she will submerge herself in the great sorrow. Shiva asks his disciples to bring back the first living being’s head they encounter.

The followers came back with an elephant head and Shiva, using his mystical powers, brought Ganesha back to life and offered him astounding powers. This is how Shiva did his redemption.  Since then, Ganesha is being praised as the God of righteousness and harmony. Every second Hindu family in India have either a blissful Ganesha painting or an artefact to feel His presence and to cleanse the entire aura with spirituality.

Deciphering the artists’ embodiment of Ganesha

Behind every art, there is a hidden translation. Same goes with the paintings of Lord Ganesha. Every small detail in his representation is quite meaningful and inspiring. Let’s go through them one by one.

We all have seen the big belly with which Ganesha is represented in the artworks. Did you ever think that the fat stomach is actually a symbol for something that is clearly not visible in the Ganesha paintings?

Well, the belly signifies compassion, acknowledgement, and benevolence. The message is to make people realize that doing good deeds and staying humane is an essentiality that shouldn’t be forgotten.

In most of the Ganesha artworks, the deity is shown with an upraised hand. This is the depiction that Ganesha always shower his blessings to his worshippers by saving them from bad times. The other hand of Ganesha can be seen in a resting position. This hand indicates that Ganesha is quite generous in nature. Another comprehension of the resting hand is the way of telling humans that we comprise three basic elements and eventually will be dissolved back to nature one day.

In addition, there is another hand holding an axe that tells us to cut all the materialistic cord. The hand that holds lotus is the signature of piousness even when surrounded by the corrupt environment.

Ganesha is said to have sacrificed one of his tusks so that Mahabharata can be written. This represents his immolating nature.

Ganesha is represented with extremely small eyes. These eyes depict the remarkable focus of Ganesha. People do hang Ganesha paintings in their kid’s room so as to spruce up the entire aura with positivity and euphoria.

Two big ears of Ganesha tell us to listen more. Today, people are keener on speaking than hearing. Ganesha directs everyone to become a great listener.

Ganesha is said to bring happiness and well-being for the people. People, hence, do not shy away to purchase exquisite Ganesha artworks for themselves or to gift these paintings to their loved ones. With decoded meaning in the physical embodiment of Ganesha, everyone can follow the true path of righteousness and happiness. Thanks!