Chennai is the capital of Tamil Nadu. It is one of the oldest cities in India and was a major port city even during the medieval era. The city is filled with numerous remnants from the past and is also quickly transforming into a modern city. Visit the city to explore all of its aspects and pick from the best hotels in Chennai.

Chennai is the most significant city in the state of Tamil Nadu. The city is the capital of the state and the 6th largest city in India. It ranks fourth in the list of most populated cities in India and is the second most significant commercial city in India (the first being Mumbai). Formerly known as Madras, the name that existed even before the arrival of British, the city is also one of the oldest cities in the country and is often referred as the “Gateway to South India”. Situated on the south-eastern coast of Indian mainland and housing a naturally deep harbor, the city quickly emerged as a significant port city. The harbors which were deep enough to dock large container ships quickly became important ports on the international sea trade routes. It is for this fact that the city was prized by the Dutch, Portuguese, and British during the medieval era, and number of battles were fought to gain reign over the city.

The earliest prominent references of the city’s past point to the time when the city and major parts of South India were ruled by the Cholas. However , a number of references from the Stone Age have been found from different parts of the city. The Pallavas of Kanchi ruled the areas of Pallavaram and Mahabalipuram during the era of king Mahendravarman I. These are today the localities of Chennai and are filled with numerous remnants of the bygone era. In 1522, the Portuguese came to Chennai and became the first Europeans settlers. They built a fort called São Tomé , which is one of the first few European forts in India. The Portuguese were followed by the Dutch who arrived in 1612 and settled themselves near Pulicat, another locality of Chennai. Following them came the British East India Company on August 1639. They bought a small part of the land for trading purposes from Damarla Venkatadri Nayakudu, who was then the ruler of the region. They soon built a fort, called St. George Fort which later became their stronghold to gain dominance over the region. The city is today filled with numerous remnants, relics, and testimonies left the past rulers. The Government Museum Complex in Egmore is filled with countless relics and remnants and gives a glance at the history of the city. It is a must visit place and one of the top tourist spots in the city. The good thing is that there are certain good hotels in Chennai in the vicinity. These hotels are ideal choice if one seeks conveniences of connectivity. 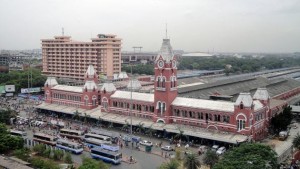 Being one of the top cities in India, the city is equipped with an excellent airport. The Chennai to Madurai flights is one of the most preferred modes to access the city. Besides, there are regular daily flights from Mumbai, Delhi, Kolkata, Pune, and Bangalore etc.