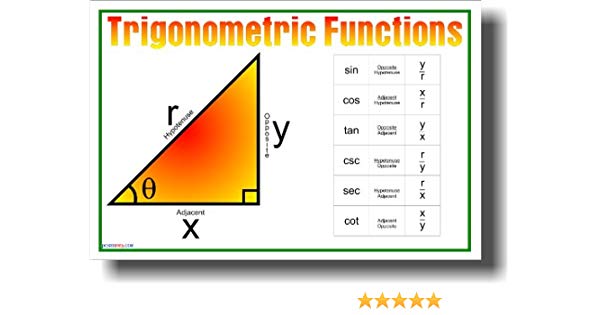 Hypotenuse Side – The longest side of a right triangle

Adjacent Side – The side next to the angle θ

Opposite Side – The side opposite the angle θ

Using the sides of the right triangle and angle θ, the six functions are given as follows:

The inverse function of the trig functions is called inverse trigonometric functions. It is used to obtain the angle measure from any of the trigonometric ratios. It is also known as “Arc Functions”. It is a function defined in a certain interval. It means that the function is defined under the restricted domain with the specified range. We know that there are six trig functions. For all the six functions, there is an inverse function. Hence, the six arc functions are:

Since trigonometry deals with the calculations of lengths, heights, and angles of a triangle, it has enormous uses in our daily life activities. Some of the applications are: